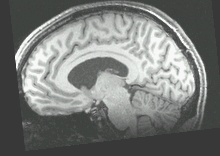 Yes, I assure you all, that is actually my brain. It would be interesting to get it scanned again after our trip to see just how many brain cells were lost. But finding a way to get paid to do it, as I did before, would be a bit more difficult. As I was walking to work one day I saw an add that stated “Cash for your brain!”. Being the curious human being that I am, I decided to take a closer look. “$50 for one hour of your time” it stated. Being a cash strapped recent grad I couldn’t resist, I decided to fire off an e-mail to see what it was all about. Shortly thereafter I received the following reply.

Hi, thanks for your interest in this study.

We are currently running an MRI experiment examining various aspects
of visual comprehension. The experiment entails looking at degraded
pictures, and then pressing a press a button once you recognize the
object. Scanning time takes approximately one hour. It takes about
15-20 minutes to fill out the prelimiary paperwork, but this usually
takes place at our Evanston office the day before scanning. Scanning
takes place at the Chicago Northwestern Campus, at the NWM Hospital.
The address is the Olson Pavillion, 700 E. Fairbanks. There is an
intercampus shuttle that runs hourly between the Chicago and Evanston
campuses, and it is free for Northwestern Wildcard holders.

Compensation for the experiment is $50.

The following are necessary criteria for participation:
-Right-handed
-Native English speaker (this means that English was the only
language you were exposed to before the age of five)
-Non-claustrophobic
-No metal in body (e.g. non-removable piercing, pacemaker, etc.)
-Must be between 18 – 40 years of age

Please let me know if you are still interested, and I will email you
scan times when they become available. We hope to have slots open
next week.

Right handed check
Native English speaker uhh… lets pretend we didn’t see that
Non–claustrophobic only one way to find out!
No metal in body Fairly certain that whatever I swallowed as a child has worked its way out of my system
Must be between 18-40 check

Having taken the afternoon off from work I picked up one of the free shuttles that go to the downtown campus. As I was waiting for the bus I was a bit nervous – I didn’t really know what was in store for me. I was assured that the procedure was completely safe and harmless, but there was still a part of me that wondered if passing 2 teslas of magnetic force through my body would do some harm. That’s 40,000 times the strength of the earth’s magnetic field! Sitting on the bus, I nervously read the paper…

The building was only a few steps away from the shuttle stop. As I approached I could feel my pulse quicken. I timidly went up to the guard…

“I’m here for the brain experiment…”
She gave me the ‘oh, you are one of them’ look as she jotted something down then handed me a bright yellow tag.
“You must wear this tag at all times in the building.”
I clipped it on to my shirt noticing that it only had an identification number.
“Proceed to the elevator on your right to sub-level 2.”
There was something sinister in the way she said it.

I caught a glimpse of my reflection on my way to the elevator and the flash of yellow made me realize that I was now just a subject of an experiment. Seeing other patients with actual medical needs forced me to contemplate what in the world I was doing there! I took a deep breath and hit the button for sub-level 2. It took longer than I expected.

The elevator doors revealed a brightly lit hallway of antiseptic white. The bleakness was interrupted by an awkwardly placed orange sign with an arrow that read: “MRI EXP”. With the security cameras trained on me I made my way through the maze of corridors. I couldn’t help but to think perhaps it was part of the experiment. I chuckled – suddenly having felt a certain kinship with our rodent friend the mouse.

I quietly knocked on the door and a man, not much younger than myself, opened the door and said “You must be Pablo.” He never introduced himself. The mood was much more laid-back than I had expected. The workers were all casually dressed and only one of them was wearing a lab coat. While I was filling out paperwork he explained to me exactly how the experiment worked. I would be shown partial images and guess what actually were. The button in my left hand signified that I was able to deduce the image normally. The button in my right hand signified that I figured out the image through inspiration – an “aha!” moment. If I could not guess what the image was after a certain amount of time I would be shown another image. I was assured that I would have a break after every 10 minutes. I was also told that if they were to see anything abnormal in the scan, they were required to notify me about it. At least this expriment would have some beneficial value beyond the $50! I was then sent to the changing room to strip down and put on a hospital gown. 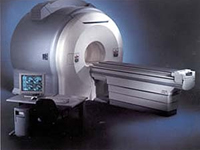 The room with the MRI machine was enormous. Much care had been taken to design it without any metal parts. All of the desks, carts, tools and trays were made of plastic making it seem almost fake. As I laid down on the bench they told me about the panic switch that was near my chest. They also told me to get comfortable as I would not be moving for the next hour. I thought that breaks would allow me to get out of the machine and move around, but as it turned out they were only breaks from the images and the noise of the machine. So this was to be a test of stamina and will – could I take the entire hour without moving at all?! At one point they asked me to shut my eyes and not to open them until they said so. I figured that it was so that they could move me into the machine – but the bench never moved! I still have no idea why I had to shut my eyes – or what it is that they were up to!

The process of moving into the machine was quite slow. There was a mirror hanging over my eyes to be able to view the screen with the images, and they had a microphone hooked up so that they could hear my response to what the image was. It was MUCH more claustrophobic than I expected – but the screen was a good distraction and gave some sense of being in a bigger area. They had given me earplugs as the machine is VERY loud when it is on. After the first 30 minutes of questions I started feeling a bit warm and by the end of the session it was downright hot in that tube! I was able to last the entire session, even though I thought about calling it quits a few times towards the end. I was, somehow, able to keep still for the entire hour as well – if you can believe it!

Once it was over I was able to change back into my clothes and then they handed me the $50 in cash. I asked them how they thought it went – and they said that I had figured out more of the images “by far” than anybody else they had tested! Although I’m not really sure what that means in the end – I left feeling vindicated!

Was it worth the $50? Probably not. I wouldn’t do it again, that’s for sure.. But it was quite the experience – and I now have my own copy of an image of my brain!

4 thoughts on “A peek inside my head”